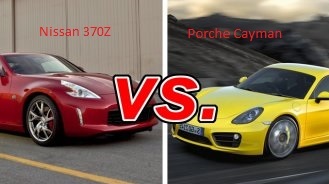 Hands up if you think that the Nissan 370Z has what it takes to duff the Porsche Cayman up, or at least administer a sharp poke to the eye!The 370Z is much more reasonable in price than the Cayman,but money doesn’t mean a thing when it comes to quality!

As we lay these two gorgeous cars out side by side what is the first thing you see? The first thing I noticed was they are both 2 doors, have 4 wheels, and a sloping rear hatch. That’s pretty obvious though so let’s go deeper into what makes these two rivals. We all know that they both have several enemies, that’s a given!What is most important is not what the enemies see but the lovers of these sporty little eye catchers.

Cayman lovers say that Porsche has simple yet classic curves that will remain timeless! The hood is shorter and the rear end is longer, which is where all the power is held! Yes that’s right, the engine is in the back end which makes the front hood the trunk. Confusing yet pretty cool! Speaking of rear ends, the 370Z has a huge one and the verticality of the taillights only make it seem bigger. Then again who am I to judge on what makes it’s rear end look big!

The interiors of both are classy yet sporty! As you look at the Cayman however it is usually not hard to see what decade it is from by the way the dash is straight and buttons are perfectly inline! 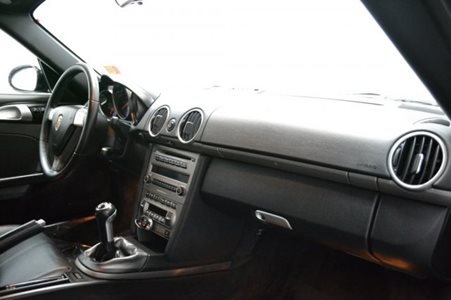 To where the 370Z is a little more progressed looking like it is one hologram reporter short of Wolf Blitzer’s Situation Room! Now wouldn’t that be neat to have a hologram media center! 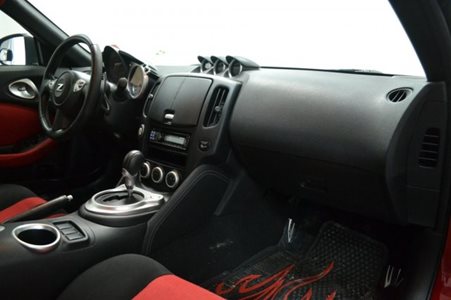 This is where the real difference comes in between the two! Everyone knows if they own a car like either of these two they want to see what it has! This is all fun and games until you approach the curves! You see a Porsche works all 4 tires evenly when turning so the weight is centralized within the chassis, trajectory minutely adjustable via the throttle. Let me give you a visual of what could happen when approaching a curve at high speeds in a car with centralized weight!

That’s right, this baby could pop over a crest without so much as a squirm! Being a Granny on the curves could play in your favor with the Cayman! The 370Z however, is more… shall we say..flamboyant. The rear end governs the angle of attack. That’s right, it’s all about the bass! Since the weight is all in the rear it helps it slide easily around the curves or in other terms drift!

It would Almost make you feel as though you were floating!

So far the 370Z is sounding like the winning competitor, Right? You would think that until you realize that the Cayman’s 2.7L V6 engine has a much quicker get up and go than the 370Z’s 3.7L V6! In the end they are both really great cars for someone looking for a little excitement! The hard part is deciding, do you want a genuine sports car like the Porsche Cayman or are you really looking for an entertaining Sports car like the Nissan 370Z? Before you make up your mind which one is better for you why don’t you come in to Woody’s Automotive Groupand test drive both while they are still on our lot!You can never truly know which one is better until you get your own feel of things!