I can save money while I’m sitting? Tell me more! 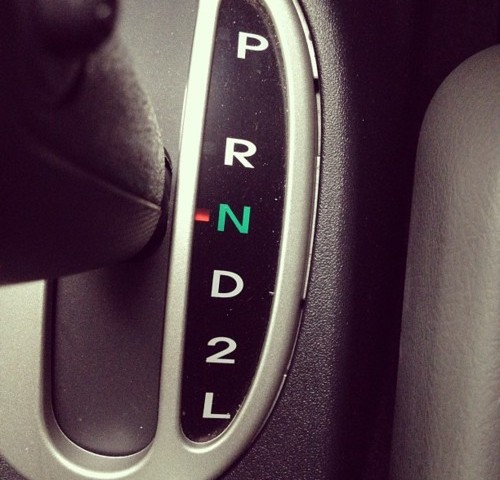 How can I save fuel when I’m not driving?  Easy-  don’t work the engine too hard when the car’s not moving.  If your engine is running but the car isn’t going anywhere, your money is just flying out the tailpipe.  Idling is an mpg killer because when you’re waiting at that road construction site or trapped by the never-ending freight train, your fuel economy is 0 mpg.

Shift into neutral while you wait
By dropping your transmission into neutral (this is true for both automatics and stick-shifts), you should notice that your engine runs a little calmer and at a lower rpm.  By keeping the car in drive during these marathon waiting sessions, it puts an extra and unnecessary load on the engine, and it does nothing but drain fuel.  If you’re running your air conditioner during these stops, your engine already has enough of a load working against it.

Just shut the car off
If it’s a nice day outside and you can survive without your air conditioner, why not just shut the engine off during those long waits?  Did you know that one minute of idling uses more fuel than a re-start? I’m not talking about shutting off your engine at every stoplight, but if you anticipate waiting for a few minutes, just shut the engine off.  This goes for those times when you stop to send a text, or you’re going to leave the car for a minute while you pop in somewhere to drop off your laundry.

Just park it
I’m guilty of this one:  I want the parking spot that’s close to where I’m going.  I’ve been know to drive around a parking lot a couple times so that a spot that’s close to the door will open up.  If I would just park the car and walk the extra 50 feet, I would save that fuelmoney and I’d probably be inside sooner.  Hey, I’m working on it…

Don’t rev the engine
Even though I don’t see it happen as often as I used to, there are still folks who think that their car will be easier to start if they give it a little shot of gas right before they shut off the engine.  This is a leftover thought from the good ‘ol days of carburetors, and even then it didn’t really work like that.  In a modern engine, this doesn’t help anything.  If it has any effect at all, it will dump some extra gas into the cylinder where it can clean away the oil.  Nothing good will come from this.

Don’t coast in neutral
What?  This seems backwards…  Not really- most modern engines are smart enough to shut off the fuel to the engine if the car is coasting in gear.  This is because the forward momentum of the vehicle is keeping the engine running.  If you shift into neutral while you’re coasting, there’s no external force keeping the engine spinning, so car has no choice but to keep the fuel flowing.  Wait until you stop to make the shift into neutral for those long stops.

If you’ve tried all kinds of tricks to save money on fuel but your vehicle just isn’t cooperating, maybe it’s time to chat with a qualified service technician. Excessive fuel consumption might be an indicator of a larger problem. Swing by the Service Department at Woody’s if you think your car is gulping more fuel than you think it should- it could save you tons of money in the long run.