Out with the Old, In with the GOAT.

What Makes Ram the Fastest Growing Brand in America?

What’s your pleasure?  The 2013 Mini Cooper or the 2013 Fiat 500?  Good things come in small packages, so when these two go head-to-head you can expect some sparks to fly!  At first glance, it’s obvious that these two have lots in common: very small, very sporty little cars that are available as hard-tops or convertibles.  Both offer several trim levels and even a couple of different sizes, but what are the real differences? The Fiat 500 comes in different flavors including the economical POP, the larger Lounge trim, and the uncompromising Abarth.  The MINI Cooper has it’s base model, the larger Countryman, and the performance-minded John Cooper Works.  Let’s look at the building blocks of each platform: the 500 POP and the base model MINI Cooper.

The Feel:
While both of these cars are tiny, I can honestly say I don’t feel cramped in either one.  They’ve each got some weird property that makes them seem bigger on the inside than they are on the outside.  Each have their own little extras that make each cabin unique and hearkens back to their 1960’s ancestors.  The Fiat 500’s cabin is decked out with body-colored accents and jumping into the drivers seat is a nostalgic blast-from-the past.  The Cooper’s cabin has less of a retro feel to me and I think the materials are a little nicer in the Cooper.  The Cooper’s cabin does have some unique styling (which I love!), and while it looks and feels great, I think the 500’s simpler design is more intuitive and user friendly. 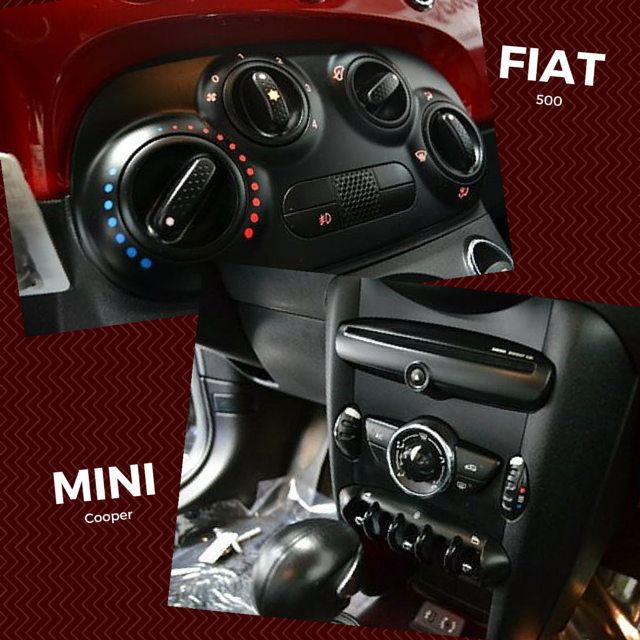 Handling:
The MINI Cooper is fun to drive around town, and the small size makes it easy to get pretty much anywhere.  Even though the suspension in the Cooper is a little firmer than the 500, I never find it to be uncomfortable or rough-riding.  If you find yourself on a nice twisty and loopy road, the Cooper’s suspension and well-balanced steering provide a feel for the road that just doesn’t seem to materialize when I drive the 500. The 500 sparkles the brightest on a hustling, bustling crowded city street.  It’s steering is light and it’s totally at home where other cars just can’t go.  The 500 just seems to be tuned into the metro lifestyle- she’s definitely a city girl.  On the open road, I didn’t feel totally connected to the curves like I did in the Cooper.  Don’t get me wrong though- because most of my driving is in town, that light steering and a suspension that’s a little on the plush side are well received by my highly refined sense of comfort!

Power & Fuel Efficiency:
Both of these cars feature a 4-cylinder turbo for the power and acceleration that those MINI‘s and Fiat‘s in the 60’s could only dream of.  At the heart of the MINI is the 1.6L engine that boasts 29mpg in the city and 37mpg on the highway.  The Fiat serves up 27mpg in town and 34mpg on the highway.  Both of these offer plenty of power, but I think the Cooper has a bit of an edge over the 500 in terms of zip.  On the open road, the Cooper just feels a little more powerful, pushing into the curves a little more aggressively.  But like I said earlier- most of my driving is in traffic, so that extra “oomph” really goes unnoticed most of the time.

Price:
So what if the Cooper has a slight advantage over the 500 when it comes to mpg’s?  The price tag just might make up the difference here.  Looking at a couple of gently used samples at the Woody’s Automotive Group, the initial outlay for the 2013 Fiat 500 POP over the 2013 MINI Cooper would be around $3000 less.  If you’re concerned about the cost of a couple mpg’s over a few years, I think the contrast in price will balance things out.

Both the MINI Cooper and the Fiat 500 would be highly regarded choices for anyone who’s interested in saving fuel, saving money, and showing a little bit of style around town. So which one is the winner? These cars are neck and neck- too close to call. Which one is right for you? I think a quick test-drive will answer that… With a 10 acre Mega-Lot and 1000 vehicles on site, no matter what your style happens to be, the Woody’s Automotive Group is your Gently Used headquarters for vehicles of all types.  Go to www.over2000reviews.com to find out why we’re a local favorite, and why we get to meet happy customers from all over the country!